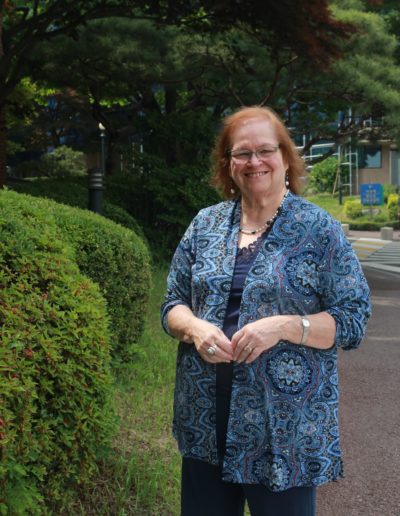 Our Won Institute Founder, Senior Member, and dearest friend, Colleen O’Connell, passed away on December 28, 2021. Over the last 22 years of her life, Colleen was a cherished member of the Won Institute. She was most instrumental in establishing the Won Institute as an accredited graduate school and has guided its continued growth and success.

Colleen made her first significant contribution by helping the Institute gain approval from the Pennsylvania Department of Education to offer Masters Degree programs. She then played critical roles in establishing the Acupuncture Studies Master Degree Program in 2005, the Certificate in Chinese Herbal Program in 2012, and the Acupuncture Studies Doctoral Degree Program in 2020. Her role in the Institute-wide MSCHE accreditation and the acupuncture program-wide ACAHM accreditation were also crucial.

Before joining the Won Institute in 2000, Colleen dedicated her life to non-profit centers. She was the Executive Director of Community Women’s Education, Executive Vice President of the Private Industry Council, and Managing Editor and Publisher of Au Courant News Magazine. Over the past two years, Colleen was deeply involved in three major initiatives: the renovation of the Global Dharma Building (GDB), the 9/16 Enshrinement Ceremony of Il Won Sang at the GDB, and the move from Samsung Hall to the GDB.

Colleen has valued the Institute’s diversity, emphasized inclusiveness and fairness, and harmonized the differences, especially between the Korean/Won Buddhism Community and English/Other Religions & Secular Community. She cherished and appreciated the Won Buddhist Kyomunim’s warm and caring spirit.

Colleen was intimately involved with the Board during her entire tenure at the Institute. The Won Institute will name the Board Room after her: The Patricia Colleen O’ Connell Memorial Board Room. The dedication and naming ceremony will be held at the Special Memorial Service  in the warm spring of this year.  Its date will be announced later.

Colleen was an ardent feminist and a passionate advocate for women, especially poor and working women. She fought for progressive causes her entire life and was a proud supporter of Planned Parenthood. Donations in Colleen’s name may be made to Planned Parenthood of Southeastern Pennsylvania, or to Won Institute of Graduate Studies.